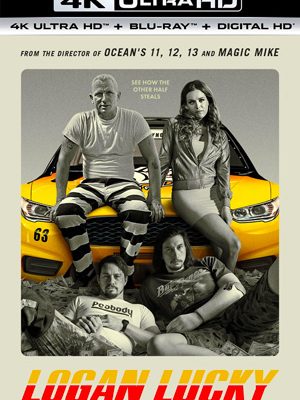 Hoping to reverse a ‘curse’ that’s hung over his family for generations, Jimmy Logan (Channing Tatum) hatches a plan to rob the Charlotte Motor Speedway during the Coca-Cola 600, NASCAR’S biggest race of the year. He convinces his bartender brother Clyde (Adam Driver) and hairdresser sister Mellie (Riley Keough) to help him pull everything off–but first they have to break the bomb-maker Joe Bang (Daniel Craig) out of jail in broad daylight. Academy Award® winner Hilary Swank plays a no-nonsense FBI agent determined to bring the Logans to justice and keep them from racing away with the loot in this high speed caper from director Steven Soderbergh.

Much to everyone’s surprise, the release will actually be devoid of any notable bonus materials. The only extras you will find on this release is a selection of Deleted Scenes. No commentary track, no featurettes, zip, zilch… well, alright then, maybe Logan stole those extras, too.