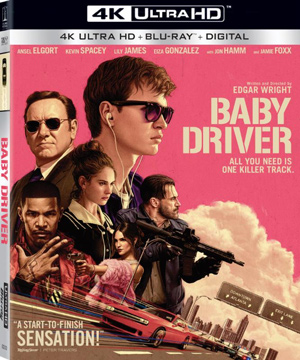 Baby (Ansel Elgort)—a talented, young getaway driver—relies on the beat of his personal soundtrack to be the best in the game. When he meets the girl of his dreams (Lily James), Baby sees a chance to ditch his criminal life and make a clean getaway. But after being coerced into working for a crime boss (Kevin Spacey), he must face the music when a doomed heist threatens his life, love, and freedom.

Written and directed by acclaimed filmmaker Edgar Wright (Shaun of the Dead, Hot Fuzz), this fast-paced and furiously stylish heist movie will come with more than two hours of high octane special features, such as a Director Commentary by Edgar Wright, and a separate Filmmaker Commentary featuring Edgar Wright and Director of Photography Bill Pope.

Also look for 20 minutes worth of Extended and Deleted Scenes along with a ton of Featurettes, such as Mozart In A Go-Kart: Ansel Drives in which you can ride shotgun with star Ansel Elgort as he works with the talented stunt drivers to become the ultimate getaway driver.
Or check out I Need A Killer Track: The Music, exploring how the film’s phenomenal soundtrack dictated both the writing process and all aspects of production on Baby Driver.
In That’s My Baby: Edgar Wright, follow Edgar Wright’s vision of Baby Driver from its inception two decades ago, to its ultimate realization on the big screen, while in Meet Your New Crew: Doc’s Gang, led by powerhouse Kevin Spacey, the cast assembled to form Doc’s gang is perfectly constructed with stars like Jamie Foxx and Jon Hamm as well as up and coming talent like Eiza González and Jon Bernthal. Go behind the scenes to see this talented group at work as they bring these characters to life.
Find Something Funky On There: The Choreography looks at how with every frame of Baby Driver set to a specific beat, it took precise choreography by the cast, crew and editors to create a cinematic dance like nothing that’s been done before.  Hear from the choreographer and filmmakers on this groundbreaking process.
Devil Behind The Wheel: The Car Chases covers everything from closing down Atlanta’s interstates to creating eye-popping maneuvers for a variety of vehicles, and lets you witness the amazing craftsmanship and sheer determination that made the film’s incredible car chases possible.

35 minutes worth of Animatics are also included, allowing you to check out the numerous pre-vis animatics developed by Edgar Wright as part of his meticulous preparation.

Also included are Audition Tapes and Rehearsal Footage and a look at the Hair, Make Up & Costume Tests Allowing you to witness the transformation of the actors through costume, hair and make-up tests.

The Mint Royale – “Blue Song” Music Video is also included, along with the Complete Storyboard Gallery, allowing you to see the elaborate storyboards developed for the film in this gallery featuring storyboards for the entire film.