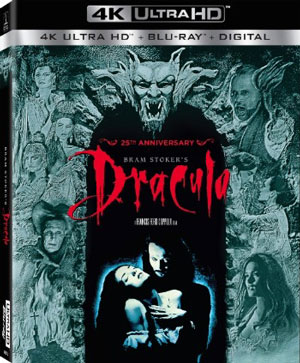 Originally released in 1992, Bram Stoker’s Dracula follows the devastatingly seductive Transylvanian prince Dracula (Gary Oldman), who travels from Eastern Europe to 19th century London in search of human love. After centuries alone, the charismatic Dracula meets Mina (Winona Ryder), a young woman who appears as the reincarnation of his lost love and the two embark on a journey of romantic passion and horror.

Further, you will find four Legacy Featurettes on the releases, culled from previous home video releases, as well as the Featurette Reflections in Blood:  Francis Ford Coppola and Bram Stoker’s Dracula and Practical Magicians:  A Collaboration Between Father and Son.

The release will be rounded out by a selection of Deleted Scenes.

Bram Stoker’s Dracula will be available as a 4K UHD version on October 3.