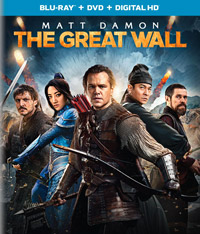 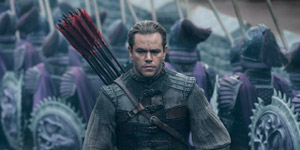 Director Yimou Zhang has been an icon for many lovers of Hong Kong cinema and he has built a reputation among American audiences as well with films such as “Hero,” “House of Flying Daggers” and “Curse of the Golden Flower.” Now, adding true Hollywood star power with Matt Damon in the lead, Zhang is at it again, bringing us the epic fantasy action spectacle, “The Great Wall.” 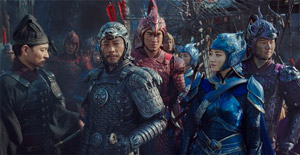 A group of European mercenaries is traveling China in search for the mystical black powder, a powerful explosive they have heard stories of. But China is a hostile country at the time with feuds raging among different warlords from all sides, and the mercenaries find themselves under attack and chased by different factions almost constantly. In the end, only William (Matt Damon) and Tovar (PedroPascal) are left of the group. When they are captured at the Great Wall, their fate seems sealed, but just at that moment, a horde of monsters attacks the wall. Strange creatures that attack by the thousands cause havoc even among the disciplined and experienced army of General Shao (Hanyu Zhang), giving the Europeans the opportunity to show their own prowess, while saving some lives in the process.

Their skills impress the Chinese and instead of being imprisoned or killed, they now enjoy Shao’s hospitality. But as the imperial strategist (Andy Lau) points out, now that they know of the existence of the monsters, they will no longer be allowed to leave—a sentiment that is confirmed by Ballard (Willem Dafoe), another European who was forced to spend years among the Chinese. Together, the outsiders make plans to steal the black powder and escape… but with a horde of intelligent monsters at your doorstep, that is easier said than done.

In many ways, “The Great Wall” is a departure from Zhang’s other movies, and the subject matter seems strangely restrictive for such a visionary filmmaker. While the visuals are still incredibly striking and his use of color is remarkable, this is not the kind of lavish period drama we have gotten used to from Yimou Zhang over the years. Instead, you get something that is reminiscent of Zhang’s version of the battle at Helm’s Deep from “The Lord of the Rings.” That is not a bad thing because the film certainly has its own signature and dynamics, but it serves as an adequate comparison in terms of the scale and tone of the film. It is furious and energetic with huge crowd scenes and plenty of hand-to-hand combat.

At the same time, it features some unique elements that are distinctly Yimou Zhang, such as the color coding of Shao’s army and the inventive fighting styles, that includes bungee-jumping lancers. Also, the pacing and the visual style remains firmly in Zhang’s hand with images that are as beautiful as they are memorable.

With Matt Damon in the lead, after the success of “Flowers of War,” Zhang once again employs real Hollywood star power, which definitely helped to attract attention at the box office. Perhaps not quite the blockbuster that the studio may have envisioned (it fell dramatically short of recouping its $150 million production budget), The Great Wall nonetheless fared a lot better than many of Universal’s own, domestic productions. 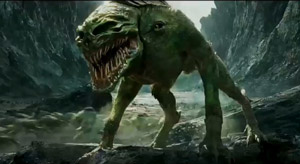 With the help of a meticulously clean high definition transfer, the release manages to render an image that is superbly clear throughout. Highly detailed, the disc shows even the tiniest changes in texture and offers a fine glimpse at every seam, dent and feather fletchings on the archers’ arrows. Color, which is one of the most important elements in Zhang’s cinematography, is also perfectly reproduced throughout. While the uniforms of Shao’s army are the most obvious examples for the saturated colors on display, the subtle shadings in the production and creature design are also notable and add to the overall visual spectacle.

Black levels are deep and firmly root the image, giving it plenty of visual depth.

The Blu-Ray Disc features a powerful Dolby Atmos soundtrack that is full-bodied and dynamic. With the ever-present engagement of the surrounds, the track is lively and truly throws you in the middle of the battle scenes. The sound design makes heavy use of low rumbles and bass-laden impacts to ensure the overall experience reflects the scale of the battles and the power of the encounters. All of it is reproduced with clarity and transparency and the mix always ensures that dialogues are well integrated and not drowned out. 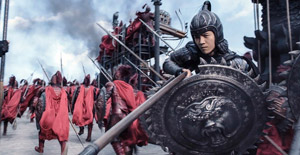 Naturally, the release also contains a number of bonus features, including a selection of Deleted and Extended Scenes. The meat of the supplements is made up by a handful of featurettes, however, that take a look at the production and go behind the scenes. They will give you a closer look at the visual effects, the monster design, the design of the weapons, as well as the movie’s world as a whole.

You will also find interview featurettes on the disc, featuring Matt Damon as he discusses the making of the movie in China, as well as the privilege he felt working with legendary director Yimou Zhang.

The DVD version of the movie, as well as a DigitalHD download code, is also included in the release.

“The Great Wall” is a fantasy action movie that nicely mingles Asian influences with Western sentiments, which should have helped make the film more accessible to worldwide audiences. However, the lyrical approach that is traditionally the hallmark of Zhang’s movies has been lost in the furor of this action-packed monster battle, and clearly, fans of the director’s traditional work did not exactly flock to the movie. While this change of tack may open up the door to other audiences and possibilities, it is hard to deny that this is a movie almost anyone could have made. I can’t help but feel that Yimou Zhang’s incredible talents were somewhat wasted on this rather banal story and the overpowering action. But perhaps that was his intention. To break out and do something entirely different—and having a $150 million budget on hand probably did play a huge role in the attraction to the project as well.

Be that as it may, though, “The Great Wall” delivers. Whatever it may lack in the intellectual and sweeping narrative departments, it makes up for with action and explosive spectacle.