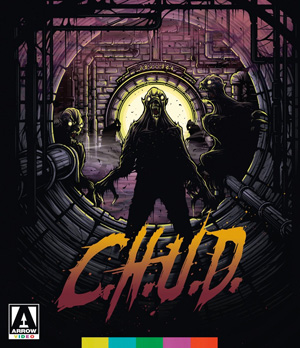 Arrow Video has just announced the cult horror film C.H.U.D. to be released as a 2-disc Special Edition Blu-Ray Disc in November.

In downtown Manhattan, a police captain’s hunt for his missing wife leads to the discovery of a series of mysterious disappearances in the area. Extending his search into the tunnels and sewers below the city streets, it soon becomes clear that something monstrous is lurking in that subterranean world—and it won’t stay there much longer…

Starring John Heard and Christopher Curry, alongside an early appearance from John Goodman, “C.H.U.D.” has justifiably built up a huge cult following in the years since its release in 1984, with one of the most iconic creature designs of the period.

The release will feature a brand new restoration from the original film elements if the Original Theatrical Cut as well as the Integral Cut of the movie in 1080p high definition. It will be accompanied by an uncompressed PCM Mono audio track and English subtitles.

Also look for an Extended Shower Scene and the movie’s Original Theatrical Trailer.

The release is rounded out by a Fully Illustrated Collector’s Booklet featuring new writing on the film by Michael Gingold, and a Reversible Sleeve featuring original and newly commissioned artwork by Dan Mumford.