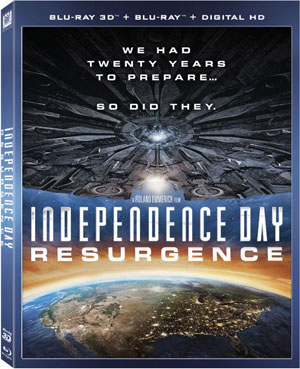 Twenty years after mysterious aliens nearly wiped out humankind, they’re back with a vengeance in this explosive sequel to the original blockbuster hit, “Independence Day!” Using recovered alien technology, the nations of Earth developed a vast defense program to protect the planet, led by Jeff Goldblum, returning as brilliant scientist David Levinson. But nothing could prepare us for a new invasion of unprecedented scale—and only the ingenuity of a few brave men and women can save our world from extinction.

Also included are the Featurettes ”The War of 1996” and ”It’s Early, ABQ!”, as well as the Making-Of Featurette ”Another Day”.

A Gag Reel, a Gallery of Concept Art and the movie’s Theatrical Trailers and TV Spot are also included.