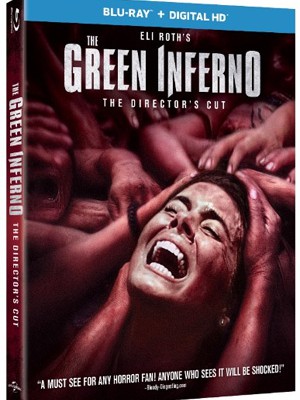 New York college student Justine (Lorenza Izzo) meets student activist Alejandro (Ariel Levy) when he goes on a hunger strike on behalf of underpaid janitors. Smitten, she agrees to help Alejandro undertake his next project: rescuing an Amazon village from destruction by a greedy multinational corporation.  But Justine soon comes to regret her decision when their plane crashes in the Peruvian jungle and the students realize they are not alone. No good deed goes unpunished as the well-meaning students are captured by the cannibalistic tribe they came to save.

The release will be a bit slim on the supplements and conain only a Commentary Track with co-writer, director and producer Eli Roth, producer Nicolás López, and stars Lorenza Izzo, Aaron Burns, Kirby Bliss Blanton, and Daryl Sabara. no other bonus features have been announced.