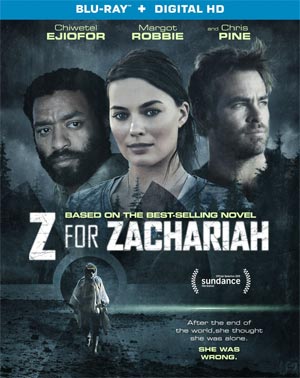 Lionsgate Home Entertainment has just added the provocative thriller Z for Zachariah to its line-up, scheduling this film for release on DVD and Blu-Ray Disc in late October.

In the wake of a disaster that wipes out most of civilization, two men and a young woman find themselves in an emotionally charged love triangle as the last known survivors. Chiwetel Ejiofor, Margot Robbie, and Chris Pine deliver steamy, thought-provoking performances in this twist on the post-apocalyptic story.

Delivering stunningly captivating performances, Academy Award® nominee Chiwetel Ejiofor, Margot Robbie, and Chris Pine star in this post-apocalyptic tale that pits the world’s last three survivors against one another. Nominated for the Grand Jury Prize at the 2015 Sundance Film Festival, the film was praised by TwitchFilm as “one of the best of the year,” calling Z for Zachariah “a gem of a film.”

Both, the DVD and Blu-Ray versions will include a selection of Deleted Scenes, as well as the Featuyrette “The Making of Z for Zachariah”. In addition, you will find Extended Interviews with Actors Chiwetel Ejiofor and Margot Robbie, Director Craig Zobel and Screenwriter Nissar Modi on the releases.