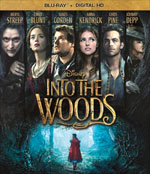 Aside from the film and its bonus features, Walt Disney Home Entertainment has also added a number of hidden features to the Blu-Ray release of the fairy-tale mash-up Into the Woods.

From the disc’s “Bonus Features” menu, go to the menu entry for “Streep Sings Sondheim – She’ll Be Back.” Now, press the Down arrow key on your remote control and an orange dot will appear on the screen.  Press “Enter” to see a clip of Meryl Streep (the Witch) climbing the Forbidden Tower.

Now, go to the “Deeper Into The Woods” menu, and from there, highlight the menu entry for “The Costumes Of The Woods.”  Press the “Up” arrow on your remote control to bring up another orange dot. If you press “Enter” now, you will get to see a clip of Anna Kendrick (Cinderella) wearing gold sneakers.

There is another hidden gem for you, hidden in the “Music & Lyrics” submenu. There, go to the menu entry for “Hello, Little Girl” and press the “Up” arrow key on your remote control to display an orange dot on the screen.  Press the “Enter” key and you will see a clip of the evil step-mother and her daughters.

There is another hidden feature in the “Music & Lyrics” menu. This time, highlight the menu entry for “Giants In The Sky.”  Press the “Up” arrow key on your remote control again to bring up yet another orange dot.  Now press “Enter” to see a clip of Daniel Huttlestone (Jack) practicing climbing the beanstalk.

The final hidden feature on the disc can be discovered on the Main menu. There, go to the menu entry for “Sneak Peeks” and press the “Up” arrow key on your remote control for another orange dot.  If you press “Enter” now you will have the chance to watch a clip of the demise of the Witch.