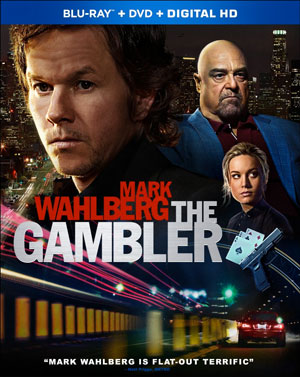 Eagerly awaited, Paramount Home Entertainment has just announced the upcoming release of the high-stakes thriller The Gambler on Blu-Ray Disc and DVD in April.

Mark Wahlberg stars as Jim Bennett, a brilliant professor leading a secret double life as a high-stakes gambler.  When Jim is forced to borrow money from a notorious gangster, he places the lives of those he loves in mortal danger. With time running out, he must enter the criminal underworld and risk everything to keep from losing it all.

The DVD version of the movie will feature an anamorphic widescreen transfer along with a Dolby Digital 5.1 audio track. No bonus features will be included in this version.

The Blu-Ray version fares much better, in that it offers a 1080p high definition transfer with an English 5.1 DTS-HD Master Audio track, and a solid compilation of bonus features.

Among these supplements you will find Deleted and Extended Scenes, as well as the Featurettes ”Mr. Self Destruct: Inside The Gambler,” “Dark Before Dawn: The Descent of The Gambler,” “Changing The Game: Adaptation” and ”In The City: Locations”. In addition the Costume Design Featurette ”Dressing The Players” will round out the release.