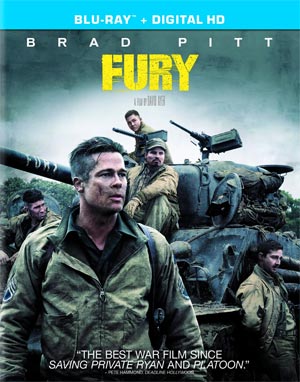 Sony Pictures Home Entertainment has decided to bring out the really big guns in the new year, launching the powerful World War II movie Fury on Blu-Ray Disc and DVD to lead the battle-hardened crew of a U.S. Sherman tank on a deadly mission behind enemy lines.

April, 1945. As the Allies make their final push in the European Theatre, a battle-hardened army sergeant named Wardaddy (Brad Pitt) commands a Sherman tank and her five-man crew on a deadly mission behind enemy lines. Out-numbered, out-gunned, and with a rookie soldier thrust into their platoon, Wardaddy and his men face overwhelming odds in their heroic attempts to strike at the heart of Nazi Germany.

The DVD version will contain the Featurette “Blood Brothers” in which the cast and crew discuss their roles and on-set dynamics.

The Blu-Ray version will offer a lot more in-depth supplements, including the aforementioned Featurette “Blood Brothers”. In addition, this version will also include more than 50 minutes of Deleted & Extended Scenes, as well as three additional Featurettes.

In the “Director’s Combat Journal”, David Ayer gives an account of the months spent in the English countryside shooting, finding antique tanks to drive and managing the scale of production that a WWII movie demands.

“Armored Warriors: The Real Men Inside the Shermans” allows some of the real-life soldiers who lived and fought day-to-day in a Sherman tank reflect on their WWII experience.

“Taming the Beast: How to Drive, Fire, & Shoot Inside a 30-Ton Tank” is a demonstration by experts how the giant Sherman tanks operate and fire. In this featurette, the camera also goes inside the tank to bring an in-depth, point-of-view experience, along with cast and crew reflections on filming in the “human sardine can.”