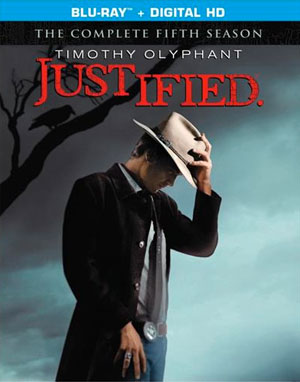 “Justified” returns for its fifth season with Dewey Crowe heading north to invest a $300,000 settlement from the Marshals Service in a brothel owned by Boyd Crowder (Walton Goggins), but it isn’t long before his cousin Daryl Jr. and the rest of their Florida crime family arrive to cash in, too. As Daryl looks to consolidate the business in Harlan, Boyd’s efforts to help Ava (Joelle Carter) fix her murder trial run aground, forcing him to reach out to ruthless crime bosses from Lexington, Detroit, and even Canada and Mexico. With the Crowes complicating life in Harlan, Boyd enters into a series of ill-fated alliances that threaten to bring him down and expose Raylan Givens’ (Timothy Olyphant) involvement in a mobster’s questionable death. With Raylan’s future in doubt, a revenge attack catches Art (Nick Searcy) in its crosshairs, unleashing a federal investigation that throws the Crowes into turmoil and puts Boyd on a collision course with the law.

While many TV shows arrive fairly devoid of bonus materials, Sony is sparing now expense in order to make the release a feast for fans. The DVD version will feature Deleted Scenes, as well as Commentary Tracks on the episodes ”A Murder of Crowes” and ”Restitution”.
The Featurette ”Season of the Crowe” is also included, taking you behind the scenes of the show and the production.

he Blu-Ray version fares even better, offering up all the above bonus materials, but further adding ”The Coolest Guy in the Room” to the release, a tribute to the late, great Elmore Leonard.
Also included is ”The Onion Eulogizes Elmore Leonard”, in which Patton Oswalt (aka “Constable Bob”) reads The Onion AV Club’s obituary for Elmore Leonard published upon the author’s death.
Production Designer Dave Blass gives a tour of Kentucky’s State Penitentiary in the Featurette ”The Big House”, while the ”Writer’s Diary: A Week of Starvation” gives you the chance to spend a week on set with Co-Executive Producer and writer Chris Provenzano as his episode, “Starvation,” is filmed.

More Featurettes await, such as ”Getting the Shot” in which Director of Photography Francis Kenny gives insight into the show’s distinct look and style, or ”Raylan Givens: Two Roads Diverge” allowing Executive producers Graham Yost, Fred Golan and Dave Andron to discuss two characters from Season 5 who represent foils for Raylan Givens.
In ”King Lear”, Dave Andron, Graham Yost and Jere Burns discuss a key scene from Raw Deal, and finally, ”The Wall of Death: Season Five Body Count” takes a look back to all those lost this season.

“Justified: The Complete Fifth Season” arrives on December 2 and can be yours for $65.99 on Blu-Ray Disc and $55.99 on DVD. I should point out, however, that Amazon is offering a tremendous deal on these sets currently, offering them on pre-order at almost 50% off!