Even a century after celebrating his biggest successes, the name “Houdini” is still a household name. That alone is a remarkable achievement for an entertainer, but as the TV miniseries of the same name reveals, there was a lot more to the man than magic tricks.

At a young age, Erich Weiss, the son of Jewish immigrants, notices that his ability to baffle people with a bit of sleight of hand can actually generate money. Money his impoverished parents desperately needed, and very quickly the young boy realizes that he has found his vocation.

Working as part of a traveling circus and sideshow troupe, he perfected his skills over the next few years while doing card tricks and other acts. Subsequently changing his name to Harry Houdini (Adrien Brody), he would later team up with his brother Dash as “The Houdinis,” baffling audiences with his staggering, seemingly unexplainable handcuff tricks. During this time he also meets his future wife Bess (Kristen Connolly) who replaced his brother in the team and would become his lifelong partner in both life and stage. 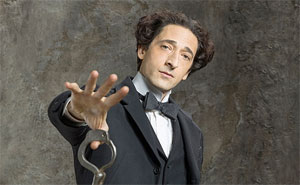 His rise to stardom was gradual at first, but he got a big break when, as a publicity stunt, he asked real police officers to lock him up in a jail cell during a European tour. Stripped naked, searched and handcuffed, he managed to escape every time—in every single city they visited.

As he shot to fame and his reputation grew, Houdini needed bigger and better tricks, and he found a like-minded friend in Jim Collins (Evan Jones), who joined the star and helped create many of the tricks and stage effects for their shows.

Getting ever more daring and spectacular, Houdini was probably the world’s first real daredevil, always teetering on the brink of death, not only seeking the challenge but thriving in it. He knew that oftentimes the massive crowds that assembled to see his acts came not only to see his tricks, but also for the off-chance that he might actually get himself killed in the act. From dangling head-down over the streets of New York, to the Chinese Water Torture Chamber, to jumping into the frozen East River while being all wrapped up in locked chains, Houdini caught the headlines and the imagination of the world more than any other illusionist of his day. So much so that his name has forever been emblazoned in the annals of entertainment and illusion. 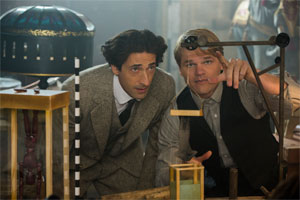 Unlike theatrical biopics, “Houdini” has a much more intimate quality. It doesn’t go for the glitz and big drama surrounding his career or his actual acts. While they are certainly showcased in-depth, the focus of this film is more on Harry Houdini as a man. The extremely close relationship to his mother is portrayed here, as well as the relationship between him and his wife over all those years. As you would expect, there was growing friction between Harry and Bess as his acts became increasingly dangerous, but for better or worse, they always stuck it out and it becomes clear that Harry would have done anything for Bess, even revert back to simple card tricks to make a living if he had to. Unfortunately his life was cut short, perhaps never even reaching his true zenith despite his success. 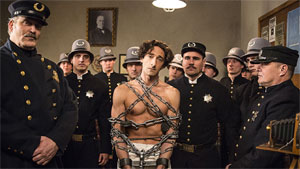 The cast of the film truly rises to the occasion and Adrien Brody as Harry Houdini is—if you will excuse the pun—magical. He brings the man to life with charisma and a manic desire to outdo himself every time he goes on stage. When he decides to explore the spiritual world after his mother’s death, he unflinchingly exposes the racket behind spiritualism, seances and so-called mediums, never resting to expose every single one of them, dissecting their charlatanous acts for what they were, the sick and greedy exploitation of people in emotional pain. Houdini was a straight arrow, through every fiber of his being. If people asked him if he really did magic, he would happily tell them that it was just a trick. If he saw people in need, he helped them and if he saw people being cheats or liars, he exposed them—even if they were close acquaintances, as was the case with Sherlock Holmes writer Arthur Conan Doyle and even his biggest idol, the magician Robert Houdin.

But also Kristen Connolly and Evan Jones do a great job, bringing it all together. Playing Houdini’s wife through the years, Connolly helps root the main character and gives him a vulnerability that he needs to be as relatable as he is, while Jones’s sidekick character is perfect, too, glowing in the success of Houdini, out of the limelight, simply taking pleasure and satisfaction in the fact that together they managed to capture and enchant their audiences. The smile on his face after a successful first-run of a new trick is simply priceless. 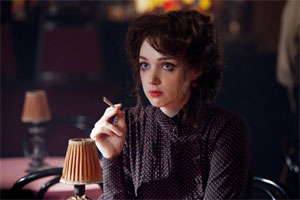 Lionsgate Home Entertainment is presenting “Houdini” as a 2-disc Blu-Ray version here, offering up the broadcast version of the film on one disc, and an extended version, that runs 25 minutes longer, on the second disc. The transfer is beautiful and clean, rendering a highly defined image with remarkable detail. It is always crisp with sharply defined edges, and rich with color, reproducing the turn-of-the-century locations and set pieces with atmospheric, yet natural-looking, palettes. No blemishes or defects are to be found anywhere in the transfer and the presentation is free of compression artifacts.

The release is accompanied by a DTS 5.1 HD Master Audio track that is active and bustling. Making good use of the surround channels, the track is occasional ambient and at other tiles aggressive and highly effective for dramatic purposes. Dialogue is well integrated and always remains understandable. 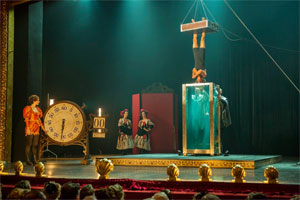 The release also contains a few extras, short promo featurettes that the History channel used to promote the mini-series in advance of its broadcast. They are a good mix of interview footage with cast and crew members, behind-the-scenes footage as well as archival footage of the real Harry Houdini. They shed light on various aspects of the production, including the escape tricks, the level of danger Houdini exposed himself to, his career and the man himself. They are short but definitely worth checking out, I found.

“Houdini” is a cool TV mini-series that I thoroughly enjoyed. It was not quite as dramatic and bombastic as I had perhaps expected, but it made up for it with sheer class and human affability. After seeing it, you can understand why Houdini was so famous, why his name still conjures up images of death-defying escape acts, and why his name still captures the world, more than a hundred of years after his zenith. Make sure to check this release out and let is whisk you away into a world of yesteryear where a young man held the eyes of the world captive, simply because he was determined to do so.