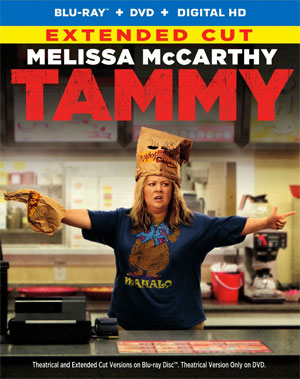 Warner Home Video has scheduled the wild-partying roadtrip comedy Tammy for release on Blu-Ray disc and DVD in November.

After losing her job, husband and car in one day, Tammy Banks (Melissa McCarthy) wants out of her small town existence. With no money or transportation, her only way out is with her hard-partying grandmother, Pearl (Susan Sarandon). Their misadventures and brushes with the law lead them on a funny and heartfelt road trip to remember.

The single-disc DVD version of the movie will only contain a Gag Reel as a bonus.

The Blu-Ray version on the other hand, released as a Blu-Ray/DVD combo pack that also contains an Ultraviolet DigitalHD version, will come packed with extras, including an Extended Cut of the film, as well as Deleted Scenes and the Gag Reel. In addition, the release will features Tammy’s Road Trip Checklist and other fun extras.