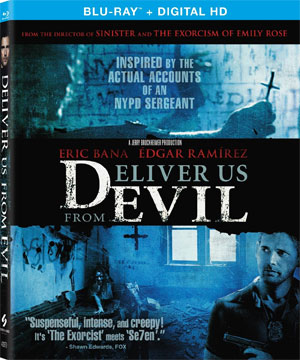 Sony Pictures Home Entertainment has revealed details today about the upcoming release of Deliver Us From Evil, scheduling the action-packed thriller for Blu-Ray Disc and DVD in time for Halloween.

A New York police officer Ralph Sarchie (Eric Bana) begins investigating a series of bizarre and disturbing inexplicable crimes. When he uncovers that the crimes are of super-natural origins, he must join forces with an unconventional priest (Edgar Ramírez), schooled in the rituals of exorcism, to combat the frightening and demonic possessions that are taking over and terrorizing their city. Filled with action and thrilling suspense, the film is inspired by the book, which details Sarchie’s bone-chilling real-life cases.

The DVD version will include a Commentary Track by director Scott Derrickson, as well as the Making-Of Featurette “Illuminating Evil”, which offers an in-depth exploration of writer/director Scott Derrickson’s journey as he created the film with a dynamic cast on location in the Bronx. It details Derrickson and Sarchie’s collaboration, explores the actors’ journey into the demonic, and lays bare all facets of this unique production.

The Blu-Ray version will include these features as well, but will come with three additional Featurettes. ”Deliver Us From Demons” is an all-access look at the production’s approach to creating a very frightening demonic presence. ”The Two Sergeants” is a behind the scenes exploration of the collaboration and process used by Ralph Sarchie and the actor playing “Ralph Sarchie,” Eric Bana.
”The Demon Detective” offers up an intimate interview with Ralph Sarchie on his experiences, including his entry into demonology, the power of his faith, and his continuing battles against the demonic.