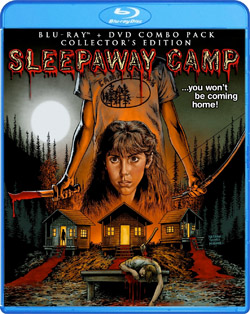 After a terrible boating accident killed her family, shy Angela Baker (Felissa Rose) went to live with her eccentric Aunt Martha and her cousin Ricky.

Â
This summer, Martha decides to send them both to Camp Arawak, a place to enjoy the great outdoors. Shortly after their arrival, a series of bizarre and violent “accidents” begin to claim the lives of various campers. Has a dark secret returned from the camp‘s past”¦or will an unspeakable horror end the Summer season for all?

Â
From its grisly makeup effects to the truly shocking, and unforgettable, climax, “Sleepaway Camp” is no ordinary slasher film”¦it‘s a cult classic!

The release will feature a 1080p high definition transfer in the film‘s original 1.78:1 aspect ratio that has been taken straight form the original camera negative, with a DTS HD Mono audio presentation. Aside from also featuring a brand new cover artwork, the Blu-Ray/DVD combo release will also contain a host of bonus materials, such as a new Commentary Track with actors Felissa Rose (“Angela”) and Jonathan Tiersten (“Ricky”), and a new Commentary Track with writer/director Robert Hiltzik, moderated by SleepawayCampMovies.com webmaster Jeff Hayes.

In addition, you will find the Short Film ”Judy” on the release, along with the ”Princess” Music Video by Jonathan Tiersten, Still Gallery and a selection of Trailers & TV Spots.