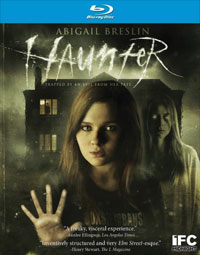 In 1986, 15-year-old Lisa (Breslin) and her family died in their home under sinister circumstances. Unable to move on, their spirits have continued to roam the house. And for nearly 30 years, they have had to live the same miserable day over and over, never thinking they’re anything but alive.

Â
But now, Lisa has started noticing things that make her believe that she and her uncomprehending family are in fact ghosts. On top of that, she realizes that she must reach out from beyond the grave to help her living counterpart Olivia and her family avoid the same gruesome fate that Lisa and her loved ones suffered all those years ago.

IFC Films and MPI Media are bringing “Haunter” to Blu-Ray Disc, giving this eerie horror thriller a cool high definition presentation. No bonus materials have been announced for the release, but expect to see this reverse ghost story in stores on February 11 for $29.98.