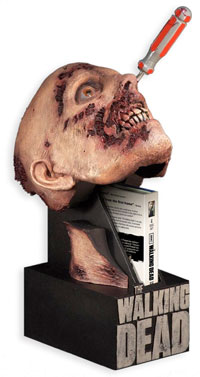 Anchor Bay Entertainment has just announced the Second Season of the acclaimed TV series The Walking Dead to arrive on DVD and Blu-Ray Disc in August.

In this much anticipated next chapter to the acclaimed post zombie apocalypse series, we return where we last left the “The Walking Dead.” The characters were in the midst of a high-intensity struggle to survive, fleeing the CDC as it burst into flames. In Season 2, they are still fighting zombies, and each other, facing more threats and obstacles than ever before.

The release will arrive as a 4-disc DVD set and a 4-disc Blu-Ray Disc set, that will contain all 13 episodes of the second season, and will be loaded with exclusive behind-the-scenes footage, featurettes and audio commentaries.

Available on August 28, the DVD set will carry a $59.99 price tag, while the Blu-Ray version will come with a $69.99 sticker price. In addition, Anchor Bay Entertainment will release a unique limited edition of the set, coming in an exclusive zombie head case created and designed by McFarlane Toys. This collector‘s item will be available for $99.99.