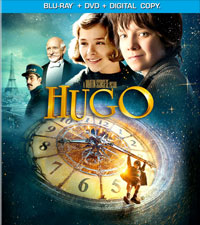 Paramount Home Entertainment has just announced details about the upcoming release of Hugo, bringing the film to DVD and Blu-Ray Disc in February.

Welcome to a magical world of spectacular adventure! When wily and resourceful Hugo discovers a secret left by his father, he unlocks a mystery and embarks on a quest that will transform those around him and lead to a safe and loving place he can call home.

The DVD version will feature the movie itself in anamorphic widescreen with a Dolby Digital 5.1 audio track. In addition, it will also include the Making-of Featurette ”Shoot the Moon”.

The Blu-Ray Disc version arrives as a combo that also includes the DVD and an UltraViolet Digital Copy. It features a 1080p high definition transfer with DTS 7.1 HD Master Audio. The Making-of Featurette ”Shoot the Moon” will also be included on the disc, as well as the featurettes ”The Cinemagician, Georges MÃ©liÃ¨s,” “The Mechanical Man at the Heart of Hugo,” “Big Effects, Small Scale” and ”Â Â Â Â Â Â  Sacha Baron Cohen: Role of a Lifetime”.