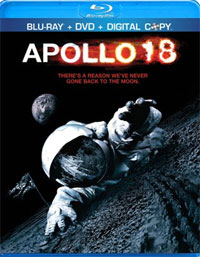 Anchor Bay Entertainment has added Apollo 18 to their release line-up, scheduling the scifi horror flick for release on DVD and Blu-Ray Disc in late December.

Officially, Apollo 17, launched December 7, 1972, was the last manned mission to the moon.  But two years later, in December of 1974, two American astronauts were sent on a secret mission to the moon funded by the US Department of Defense.  What you are about to see is the actual footage which the astronauts captured on that mission.  While NASA denies its authenticity, others say it’s the real reason we’ve never gone back to the moon.

The DVD version features an anamorphic widescreen transfer of the movie with Dolby Digital 5.1 audio. An Audio Commentary by director Gonzalo López-Gallego and editor Patrick Lussier will be included on the disc, along with Deleted and Alternate Scenes and Alternate Endings.

On Blu-Ray Disc, you will get to witness the horrors in space in 1080p high definition with DTS 5.1 HD Master Audio. The release will include the same bonus materials as the DVD version. It will be released as a Blu-Ray/DVD combo that also contains a Digital Copy of the movie.