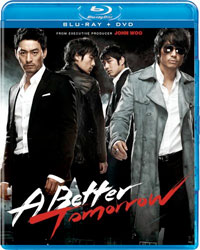 Well Go USA has just announced to bring the recent remake of the John Woo cult classic A Better Tomorrow to DVD and Blu-Ray Disc in November.

Kim Hyuk (Joo Jin-Mo) lives the fast life as a high ranking mobster in the port city of Busan, South Korea. His closet friend is fellow mobster Lee Young-Choon (Song Seung-Heon). Even though Kim Hyuk seems to be on top of the world, he is haunted by the memory of leaving behind his younger brother Kim Chul (Kim Kang-Woo) and mother as they attempted to flee into South Korea from North Korea. Kim Hyuk’s mother was beaten to death and Kim Chul imprisoned after they were caught by North Korean authorities.

Kim Hyuk then travels to Thailand with new gang recruit Jung Tae-Min (Jo Han-Seon) for a meeting with Thai gangsters. The meeting turns out to be a set-up, planned in part by Jung Tae-Min. Kim Hyuk is able to shoot his way out the meeting, but he is later caught by the Thai police and imprisoned. When good friend Lee Young-Choon hears of what happened to Kim Hyuk in Thailand, he goes to the Thai gang’s holdout in Pusan to kill their boss. During the shootout Jung Tae-Min is shot in the leg.

Three years later, Kim Hyuk is finally released from prison and travels back to Busan. He finds his close friend Lee Young-Choon washing cars now and has a limp leg. Jung Tae-Min, the man that betrayed him, has climbed up the mob ranks and is now a feared crime boss. Furthermore, Kim Hyuk’s younger brother Kim Chul has arrived in Busan and works for the Busan Police Department. Meanwhile, Kim Chul keeps close tabs on Jung Tae-Min as he attempts to take down their gang.

The release will feature the movie itself along with bonus materials, such as a 30-minute Interview with John Woo, a selection of Deleted Scenes along with Actor and Director interviews. The release will be rounded out by the movie’s Theatrical Trailer and a Photo Gallery.