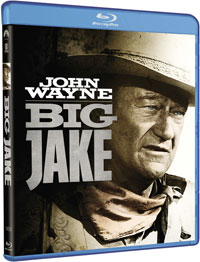 Paramount Home Entertainment has added the two classic Westerns Big Jake and Rio Lobo to theirline-up, bringing the films to Blu-Ray Disc in May.

In the action-filled Western Big Jake, John Wayne stars as Big Jake McCandles, a Texas cattle man and husband who hasn’t seen his wife (Maureen O’Hara) in over 18 years. But he returns home after his grandson is kidnapped by a vicious outlaw gang. While the law gives chase in rickety automobiles, Jake saddles up with an Indian scout (Bruce Cabot) and a box of money even though paying a ransom isn’t how Jake plans to exact good old frontier justice. Spiced with humor and first-class gunfights, this is a vivid depiction of the last days of the wild frontier.

In Rio Lobo, the action is set into motion with a spectacular robbery of a Union pay train by confederate guerillas. The train’s colonel (John Wayne) jails the enemy leaders (Jorge Rivero, Chris Mitchum) but the three men later become friends when the war ends. Together they seek the Union traitors responsible for a string of Confederate train robberies, a mission that culminates in a rousing shoot-em-up finale.

No extras have been announced for either release. Both movies will arrive in stores on May 31 for $24.99, each.