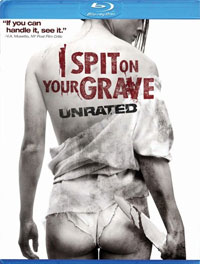 Anchor Bay Entertainment has scheduled the release of both, the original 1978 I Spit On Your Grave as well as the 2010 remake of the same name on Blu-Ray and DVD in February.

In 1978, Meir Zarchi’s “I Spit On Your Grave” shocked audiences all over the world. Critics reviled it, but audiences embraced its “Day of the Woman” empowerment message. Three decades later, lightning struck again with the 2010 remake, which shocked 21st century moviegoers and broke the film into the mainstream.

Bonus features on the 2010 “I Spit On Your Grave” Blu-ray and DVD include a Filmmakers Commentary Track with Lisa Hansen and Steven Monroe, an in-depth Behind-the-scenes Featurette, the original Theatrical Teaser and Trailer, Deleted Scenes and much more.

The 1978 “I Spit On Your Grave” Blu-ray features an all-new high definition transfer, Dolby TrueHD audio and an all-new Interview with writer/producer/director Meir Zarchi about the making of this infamous cinematic landmark and its legacy for the past three decades.