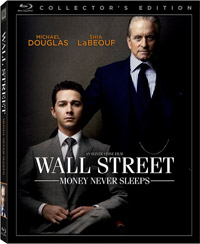 Following a lengthy prison term, Gordon Gekko (Michael Douglas) finds himself on the outside looking in at a world he once commanded. Hoping to repair his relationship with his daughter, Winnie (Carey Mulligan), Gekko forges an alliance with her fiance, Jake (Shia LaBeouf). But Winnie and Jake learn the hard way that Gekko is still a master manipulator who will stop at nothing to reclaim his rightful place at the top of Wall Street.

The DVD version will feature an anamorphic widescreen transfer of the movie with Dolby Digital 5.1 audio. As extras you will find a Commentary Track by director Oliver Stone on the disc, along with a Conversation with Oliver Stone and the cast of the movie.

The Blu-Ray version arrives in glorious 1080p high definition with DTS 5.1 HD Master Audio and will include a good number of extras. The Commentary Track by director Oliver Stone on the disc, and the Conversation with Oliver Stone and the cast of the movie will be included here, naturally, and it will be supplemented by a five-part Documentary called ”Money, Money, Money” which will cover the challenges and changes that have impacted our economic climate over the past two decades. Further you will find Deleted and Extended Scenes on the disc as well as a Fox Movie Channel presents featurette covering the stars of the movie and the characters they play. A Digital Copy of the movie will also be included on a second disc.