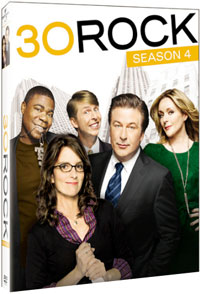 Universal Home Entertainment has added 30 Rock: Season 4 to their release schedule, bringing this DVD set to your living room in September.

Arriving as a3-disc set, the release will also include Commentary Track on select episodes as well as Behind the Scenes Featurettes for the episodes “The Moms” and “I Do Do”.

Also included is Tennis Night in America and Food Network’s Ace of Cakes: 30 Rock (and Roll).