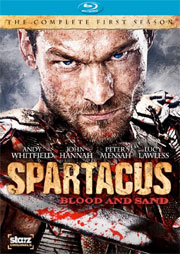 Anchor Bay Entertainment is planning to bring the TV series Spartacus: Blood and Sand – The Complete First Season to DVD and Blu-Ray Disc this fall.

The TV series stars Andy Whitfield (Gabriel, The Clinic) as Spartacus, the eventual leader of a slave army in revolt against the tyranny of the Roman Empire.

This first season explores Spartacus’ life before the revolt — his family (Erin Cummings plays his wife Sura), his time as a Gladiator, his slave imprisonment under Batiatus (John Hannah) and his conflicts with fellow slave Crixus (Manu Bennett).

Arriving as a 4-disc set, the release will contain all 13 episodes of the show’s first season, as well as a number of bonus features, such as the Featurettes “Gladiator Camp,” “History Rewritten,” “Make-up Effects” and “The Hole.”

You will also find episode-specific Commentary Track, Behind-the-scenes
Footage and a Blooper Reel on the release.