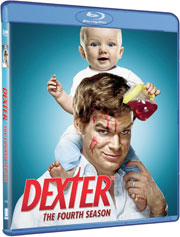 Paramount Home Entertainment and Showtime Entertainment have just added Dexter: The Fourth Season to their release line-up, bringing the show to DVD and Blu-Ray Disc in August.

The Showtime Original Series “Dexter” is back with an all-new season, and this time America’s favorite serial killer has gone from freewheeling bachelor to responsible husband and doting dad. Maintaining an average-guy facade while satisfying his need to kill has never been easy. But now, with wife and kids in tow, Dexter’s got more to lose then ever, as he gets drawn into a deadly game with a killer every bit as dangerous — and conflicted — as he is.

Now bonus materials have been announced for the release, but mark your calendar and prepare to pick up this dark TV show when “Dexter: The Fourth Season” becomes available on August 17 for $49.99 on DVD and $64.99 on Blu-Ray.