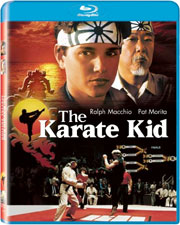 Sony Pictures Home Entertainment has just added Blu-Ray versions of The Karate Kid and The Karate Kid II to their line-up, releasing both films in May.

A fatherless teenager faces his moment of truth in The Karate Kid. Daniel (Ralph Macchio) arrives in Los Angeles from the east coast and faces the difficult task of making new friends. However, he becomes the object of bullying by the Cobras, a menacing gang of karate students, when he strikes up a relationship with Ali (Elisabeth Shue), the Cobra leader’s ex-girlfriend. Eager to fight back and impress his new girlfriend but afraid to confront the dangerous gang, Daniel asks his handyman Miyagi(Noriyuki “Pat” Morita), whom he learns is a master of the martial arts, to teach him karate. Miyagi teaches Daniel that karate is a mastery over the self, mind, and body and that fighting is always the last answer to a problem. Under Miyagi’s guidance, Daniel develops not only physical skills but also the faith and self-confidence to compete despite tremendous odds as he encounters the fight of his life in the exciting finale to this entertaining film.

Featuring a 1080p high definition with high definition audio, the release also contains a Commentary Track with Director John G. Avildsen, Writer Robert Mark Kamen and Actors Ralph Macchio and Pat Morita. Also included are the Featurettes “Beyond the Form, ” “East Meets West: A Composer’s Notebook,” “Life of Bonsai” and “The Way of the Karate Kid”. A Blu-Pop Trivia Track is also included.

In The Karate Kid II, Ralph Macchio and Noriyuki “Pat” Morita re-create the roles that brought them international acclaim in “The Karate Kid.” Karate student, Daniel Larusso (Macchio), accompanies his wise and whimsical teacher, Mr. Miyagi (Morita), to his ancestral home in Okinawa. For the boy, it’s a journey to an exotic new world offering new cluesto his mentor’s secret past. For Miyagi, it’s an opportunity to see his father one last time and torekindle a romance with his childhood sweetheart (Nobu McCarthy). But Miyagi’s return also re-ignites a bitter feud with long-time enemy, Sato (Danny Kamekona) – a feud that involves young Daniel in a brilliant collision of cultures and combat. Now, far away from the tournaments, the cheering crowds and the safety of home, Daniel will face his greatest challenge ever when teacher becomes student and the price of honor is life itself.

This release will contain the Original Featurette “The Sequel” as well as a Blu-Pop Trivia Track.