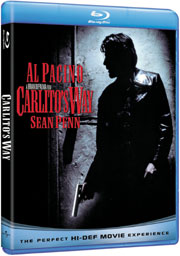 Universal Home Entertainment has added a Blu-Ray version of Carlito’s Way to their May release schedule.

From the director of “Scarface” come the critically acclaimed crime thriller “Carlito’s Way.” Oscar® winner Al Pacino gives an electrifying performance as former drug kingpin Carlito Brigante, who is sprung from prison by his high-powered attorney (Academy Award® winner Sean Penn). He stuns the New York underworld by vowing to go straight from a history of violence, but his plans are undermined by misguided loyalties and an outmoded code of honor. In a life-or-death battle, Carlito takes on the relentless forces that refuse to let him go. Co-starring John Leguizamo and Luis Guzmán, “Carlito’s Way” is a powerful, action-packed ride all the way to its explosive conclusion.

A Making Of Featurette is included on the release along with the featurette Brian De Palma on Carlito’s Way.