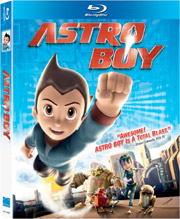 Blast off with “Astro Boy, ” the thrilling tale of a true hero! In futuristic Metro City, scientist Tenma (voiced by Nicolas Cage) creates an amazing robot boy with hidden talents unlike anything you’ve ever seen. Astro Boy (voiced by Freddie Highmore) has super strength, x-ray vision, incredible speed and the ability to fly. But, what he really wants is to know where he belongs. When the world needs saving, he’ll discover he was made for the challenge. Featuring an all-star cast of voice talent, it’s high-flying adventure that soars to new heights!

Both version will contain the same bonus materials, such as Two All-new Animated Sequences and a selection of Deleted Scenes. In addition the release will contain Featurettes and an Image Gallery.