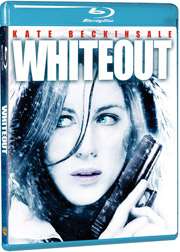 Warner Home Video has added the thriller Whiteout to their release line-up, bringing the film based on the acclaimed graphic novel to DVD and Blu-Ray Disc in January.

The wind hammers at 100 MPH. The temperature plummets to -120° F. Nature doesn’t intend for people at Amundsen-Scott Research Station to survive Antarctica. Neither does a mysterious killer who has committed the first-ever murder on that most remote of continents…and who will certainly kill again.

Kate Beckinsale plays a U.S. Marshal plunged into shocking mystery and racing to solve it before being stranded with six months of winter darkness – and a murderer – closing in.

The DVD version features an anamorphic widescreen transfer of the action-packed thriller with a Dolby Digital 5.1 audio track. As extras the disc will also contain a selection of Deleted Scenes.

The Blu-Ray version, arriving in a 1080p high definition transfer with Dolby Digital 5.1 TrueHD audio, will also include the Deleted Scenes, but also contain the Featurettes ”The Coldest Thriller Ever Story”, giving you a look behind the scenes of the film with cast and crew interviews, and ”Freeze Frame: From Page to Screen”, chronicling the graphic novel’s journey. Further this version will include a Digital Copy of the film.