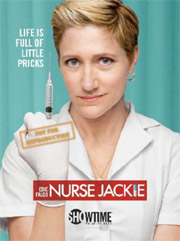 Lionsgate Home Entertainment has added Nurse Jackie: Season One to their release line-up, bringing the TV series to DVD and Blu-Ray Disc in February.

Three-time Primetime Emmy winner Edie Falco is “outstanding” (Time Magazine) as Jackie Peyton, a nurse trying to survive the chaotic grind of saving lives in a hectic New York City hospital. Sharp-tongued and quick-witted, Jackie’s a woman of substance who knows how to handle it all. With a white lie here, a bent rule there, and a steady dose of pain relievers for her chronic back pain, Jackie does whatever it takes to get the job done. See why critics call Nurse Jackie “wildly entertaining” (TV Guide Magazine) and “a habit well worth acquiring” (The Washington Post) in these bitingly funny episodes from the first season of the groundbreaking series.