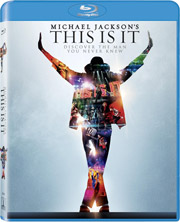 Sony Pictures Home Entertainment has just added DVD and Blu-Ray versions of Michael Jackson’s This Is It to their January release line-up.

“Michael Jackson’s This Is It” is a rare, behind-the-scenes look at the performer as he developed, created and rehearsed for his sold-out concerts at London’s 02 Arena. Chronicling the months from April through June 2009, this film was produced with the full support of the Estate of Michael Jackson and drawn from more than one hundred hours of behind-the-scenes footage, featuring Jackson rehearsing a number of his songs for the show. In raw and candid detail, “Michael Jackson’s This Is It” captures the singer, dancer, filmmaker, architect, creative genius and great artist at work as he creates and perfects his planned final London shows.

The DVD version will feature an anamorphic widescreen transfer of the film, complemented with a Dolby Digital 5.1 audio track. As bonus materials you will find 2 Making-of Documentaries on the release, along with the Featurettes ”The Gloved One” and ”Costumes”. Also included are Memories of Michael and Auditions: Searching for the World’s Best Dancers.

The Blu-Ray version arrives with a 1080p high definition transfer and DTS 5.1 HD Master Audio, while also including all of the above features. In addition, the release will contain Sony’s movieIQ online-based trivia track as well as Thriller and Smooth Criminal Vignettes, presented in 5.1 audio.