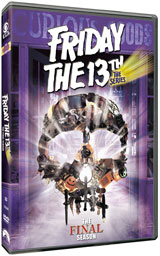 Paramount Home Entertainment has just scheduled Friday the 13th – The Series: The Final Season to arrive on DVD in September.

The suspense-drama series that brought back the serial horror genre to television features intense psychological terror and chilling suspense. Each eerie episode centers on an unlikely trio who run a shop full of rare and mysterious antiques whose previous owner was killed after making a sinister pact with the devil. The team must race against time and fate to retrieve each diabolically cursed item sold from the hexed store before it unleashes its deadly force.

The release will feature the original fullframe presentation of the show with a mono Dolby Digital audio track. No extras will be included.