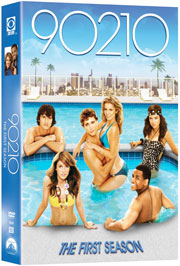 Paramount Home Entertainment has just announced the release of 90210: The First Season, bringing the new TV series to DVD in August.

An edgy, contemporary spin-off of the iconic drama “Beverly Hills, 90210,” the new “90210” looks at life through the eyes of Annie Wilson and her brother Dixon, whose first day at West Beverly Hills High School leaves no doubt they’re not in Kansas anymore.

The DVD will feature all first-season episodes in anamorphic widescreen with Dolby Digital 5.1 audio. No exact contents have been announced yet for this release.