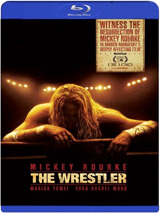 Details have just arrived on The Wrestler, coming from Twentieth Century Fox.

Mickey Rourke gives the performance of a lifetime as pro wrestler Randy “The Ram” Robinson, a former superstar now paying the price for twenty years of grueling punishment in and out of the ring. But he’s about to risk everything to prove he has one more match left in him: a re-staging of his famous Madison Square Garden bout against “The Ayatollah.” Darren Aronofsky directs a powerful cast in this action-packed saga of guts, glory and gritty determination that is “as irresistible as a headlock” (New York Post).

After the considerable Oscar attention this film received, the upcoming DVD and Blu-Ray Disc have surprisingly little in the way of extras. The discs will both come with a featurette a round table and a music video from Bruce Springsteen.