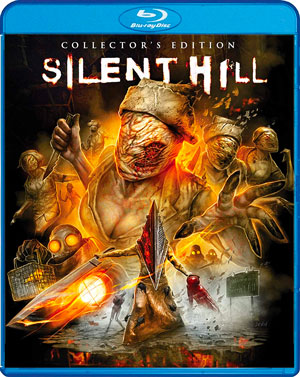 Based on the best-selling horror/action video game, Silent Hill stars Radha Mitchell as Rose, a desperate mother who takes her adopted daughter, Sharon, to the town of Silent Hill in an attempt to cure her of her ailment. After a violent car crash, Sharon disappears, and Rose begins a desperate search to get her back. She descends into the center of the twisted reality of a town’s terrible secret. Pursued by grotesquely deformed creatures and townspeople stuck in permanent purgatory, Rose begins to uncover the truth behind the apocalyptic disaster that burned the town 30 years earlier.

The six-part Documentary Path of Darkness will also be included on the release, examining the making of the movie, along with the Vintage The Making of SILENT HILL Featurette.

The release is rounded out by On-Set Interviews and Behind-the-Scenes Footage, as well as Photo Galleries and the movies Theatrical Trailer.

The Silent Hill Collector’s Edition will be in stores on July 9 for $29.98 and if you pre-order your copy on Shout! Factory’s website, you will even receive a free poster!