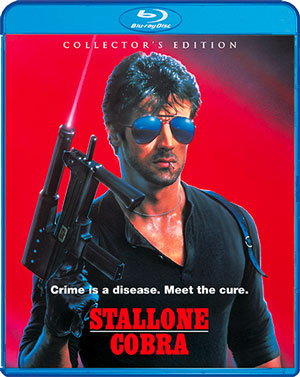 Shout! Factory has just unveiled details about the upcoming release of the 80s action thriller Cobra, bringing the Sylvester Stallone movie to Blu-Ray Disc as a Collector’s Edition in January.

Lt. Cobretti (Sylvester Stallone) is a one-man assault team whose laser-mount submachine gun and pearl-handled Colt .45 spit pure crime-stopping venom! Sylvester Stallone stars as Marion Cobretti. But to those who know him—and those who wish they didn’t—he’s Cobra, a street-tough, big-city detective who does jobs nobody else wants or dares to do.

Director George P. Cosmatos teams up again with Stallone for this thriller pitting Cobretti against a merciless serial killer. The trail leads to not one murderer but also an army of psychos bent on slashing their way to a “New Order”—and killing a witness along the way. Fortunately, her protector is Cobra, a man who delivers vigilante justice like no other!

A Commentary Track by director George P. Cosmatos is also included, along with a Vintage Featurette, Trailers and a Still Gallery.

The Cobra: Collector’s Edition will arrive in stores on January 22 for $29.99.