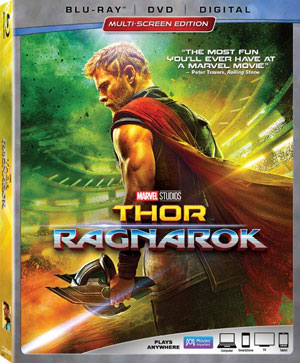 Marvel Studios has just announced the upcoming release of Thor: Ragnarok, bringing the latest movie in the superhero franchise to 4K UHD, Blu-Ray Disc and DVD in March.

In this movie, Thor (Chris Hemsworth) is imprisoned on the other side of the universe without his mighty hammer and finds himself in a race against time to get back to Asgard to stop Ragnarok—the destruction of his homeworld and the end of Asgardian civilization—at the hands of an all-powerful new threat, the ruthless Hela (Cate Blanchett). But first, he must survive a deadly gladiatorial contest that pits him against his former ally and fellow Avenger—the Incredible Hulk (Mark Ruffalo)—and grapple with his silver-tongued adopted brother Loki (Tom Hiddleston), the fierce warrior Valkyrie (Tessa Thompson) and the eccentric Grandmaster (Jeff Goldblum).

As expected, the release will be jam-packed with bonus features, including a Commentary Track by director Taika Waititi, as well as selected Deleted Scenes and hilarious Outtakes.

Naturally, another entry in the Team Thor Mockumentary is also included, this time, retitled as Team Darryl, featuring an eccentric new roommate.

A series of other Featurettes is included on the release, chronicling the evolution of MCU’s heroes culminating in “Avengers: Infinity War”, as well as numerous Making-of Featurettes exploring the unique vision of director Taika Waititi, the story’s unstoppable women, the effortlessly charismatic Korg, the tyrannical leader of Sakaar, the Grandmaster, and the film’s comic-book origins.