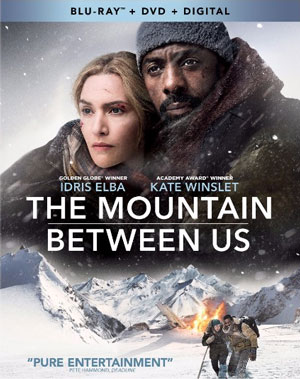 Twentieth Century Fox Home Entertainment has just added The Mountain Between Us to its roster, lining up the suspenseful drama for release on 4K UHD, Blu-Ray Disc and DVD in December.

Based on the book by Charles Martin and starring Kate Winslet and Idris Elba, The Mountain Between Us is a must-see survival drama in which, stranded after a tragic plane crash, two strangers must forge a connection to survive the extreme elements of a remote snow-covered mountain. When they realize help is not coming, they embark on a perilous journey across hundreds of miles of wilderness, pushing one another to endure and discovering strength they never knew possible.

Aside from the feature film, the release will also contain a number of bonus features, such as the Featurettes ”Love and Survival: Creating Chemistry,” “Mountain Between Them: Shooting in Isolation” and ”The Wilds: Survival Stunts”.

Also included are a number of Deleted Scenes and a Photo Gallery.

As an exclusive bonus feature, the 4K UHD version will also contain a Commentary Track by director Hany Abu-Assad.