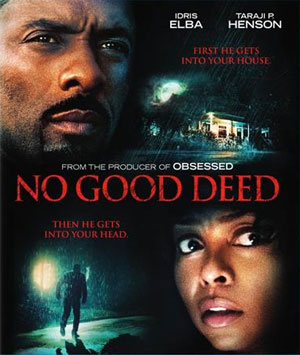 Sony Pictures Home Entertainment unveiled details today about upcoming Blu-Ray Disc and DVD versions of the hair-raising thriller No Good Deed, that have been scheduled by the studio for release in January.

Terri (Taraji P. Henson) is a devoted wife and mother of two, living an ideal suburban life in Atlanta when Colin (Idris Elba), a charming but dangerous escaped convict, shows up at her door claiming car trouble. Terri offers her phone to help him but soon learns that no good deed goes unpunished as she finds herself fighting for survival when he invades her home and terrorizes her family.

The DVD version will contain the Featurette “Making a Thriller”, in which producers Glenn S. Gainor and Will Packer, as well as Director Sam Miller, Idris Elba and Taraji P. Henson discuss the process of making a thriller, developing relatable characters, and incorporating exciting action while telling a real and raw story.

In addition to this, the Blu-Ray version will also contain two additional Featurettes.

“No Good Deed” has been scheduled for release on January 6 with a $35.99 sticker price for the Blu-Ray version and a $30.99 price tag for the DVD version.