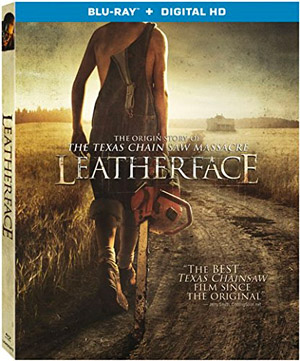 Lionsgate Home Entertainment has the next installment in the Texas Chainsaw Massacre franchise ready for you, preparing Leatherface for release as a Blu-Ray Disc and DVD version in December.

In Texas, years before the events of the Texas Chainsaw Massacre, in the early days of the infamous Sawyer family, the youngest child is sentenced to a mental hospital after a suspicious incident leaves the sheriff’s daughter dead.
Ten years later, he kidnaps a young nurse and escapes with three other inmates. Pursued by authorities, including the deranged sheriff out to avenge his daughter’s death, the Sawyer teen goes on a violent road trip from hell, molding him into the monster now known as Leatherface.

Starring Stephen Dorff as a vengeful Texas sheriff and Lili Taylor as the Sawyer family matriarch, the legendary monster gets his mask after three asylum inmates escape and leave a blood-soaked trail.

The origins of the infamous Texas Chainsaw Massacre are finally revealed in Leatherface, while the bonus features on the disc will also give you a look behind the scenes with supplements, such as the Making-Of Featurette “Behind the Bloody Mask”.

In addition, the release will include a selection of Deleted and Alternate Scenes, including an Alternate Opening and an Alternate Ending.