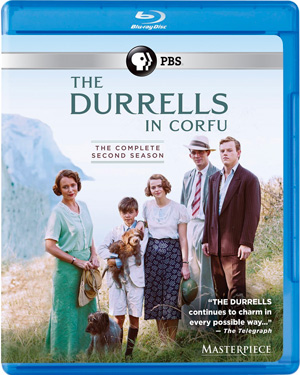 PBS Distribution just release details about the upcoming release of The Durrells in Corfu: Season 2, bringing the wonderfully charming Masterpiece production to DVD and Blu-Ray Disc in late October.

Inspired by the beloved memoirs of Gerald Durrell, The Durrells in Corfu features Keeley Hawes as Louisa Durrell, the harried widowed mother of a brood of recalcitrant children. Louisa moves the floundering family from England to Corfu in the mid-1930s to recharge their lives—hers included.

The new season finds the family in dire financial straits, as usual. They have a new landlady, Vasilia, an island beauty who holds a mysterious grudge against Louisa (Keeley Hawes) and insists on prompt payment of the rent. Desperate to come up with the cash, Louisa embarks on a bold strategy: sell homemade British delicacies at the village market. The locals are just beginning to develop a taste for scotch eggs and spotted dick when Vasilia engineers a public health crisis.

Meanwhile, Louisa is being courted by handsome British ex-pat Hugh (Daniel Lapaine), who has an olive press, drives a red MG, and wants to sweep her back to England. Margo (Daisy Waterstone) and Larry (Josh O’Connor) also get romantic partners, as do Gerry’s (Milo Parker) otters. The plot thickens when Louisa’s dead husband gets back in touch, and an international incident threatens when the expats and Greeks organize a “friendly” cricket match.

And then there’s Leslie (Callum Woodhouse), who makes a very special delivery.

No information has been made available regarding bonus features, but like most PBS Masterpiece releases, it is highly likely the release will feature a few promotional interview featurettes.