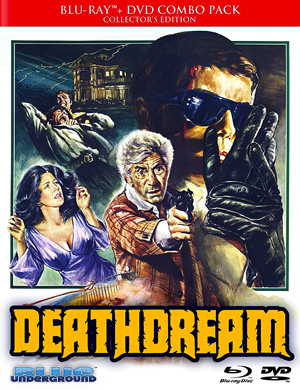 In this shattering variation on The Monkey’s Paw, grief-stricken suburban parents (John Marley and Lynn Carlin) refuse to accept the news that their son Andy (Richard Backus) has been killed in Vietnam. But when Andy returns home soon after, something may be horribly wrong: Andy is alive and well… or is he?

Deathdream was one of the very first films to confront the domestic ravages of the Vietnam War. More than forty years later, it remains one of the most chilling horror films of all time. It was released under several different titles, including Dead of Night, The Night Walk and The Night Andy Came Home, and marked the grisly debut of gore effects legend Tom Savini.

Blue Underground presents Deathdream in a new 2K restoration on this release, taken from the 35mm negative in its most complete version ever.

Also included are a number of Featurettes, such as A Recollection With Star Anya Liffey and Writer/Make-Up Artist Alan Ormsby, as well as an interview with Composer Carl Zittrer in Notes For A Homecoming.
Flying Down To Brooksville is an Interview with Production Manager John ‘Bud’ Cardos, while Deathdreaming offers up an Interview with Star Richard Backus.
Tom Savini: The Early Years is also included, along with the movie’s Alternate Opening Titles and Theatrical Trailer. A Still Gallery and Alan Ormsby Student Film are also included.

Deathdream arrives on November 28, complete with a bonus Collectable Booklet featuring a new essay by critic Travis Crawford, for $39.98.