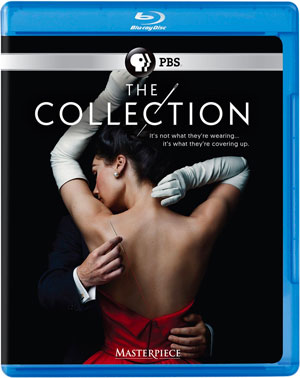 PBS Distribution has just announced the upcoming, all-new fashion-centric miniseries Masterpiece: The Collection to DVD and Blu-ray in October.

The Sabine family firm is at the forefront of this exciting but ruthless pursuit, and Paul has been chosen by the French government to lead the battle to reclaim the nation’s preeminence in the couture world. Widely regarded as the genius behind his studio’s stunning designs, Paul (Richard Coyle) is, in fact, purveying the work of his brother, Claude, an unbridled sensualist who can’t restrain his amorous impulses. In free moments, Claude works in a frenzy to sketch new gowns, often consigning them to the wastebasket, where they are retrieved and turned into the Sabine collection’s latest sensations.

Into this superficially elegant universe comes hard-boiled American reporter Stan Rossi (Stanley Townsend) with suspicions about Paul’s past, but so far little to go on. Assigned to photograph a fashion story for Rossi, Billy soon parts company to become the Sabine studio’s official photographer. In the process, he elevates the worker Nina to be the signature model for the firm—much to the chagrin of the reigning top model, Dominique (Poppy Corby-Tuech), who plots revenge.

Adding to the turmoil, police Inspector Bompard (Allan Corduner) enters the picture when Yvette’s scheme to get Claude under control goes horribly awry, leading to an investigation that threatens the entire Sabine enterprise.

Who knew that couture could be so cutthroat?

The Collection features all seven episodes that make up the show with a 480-minute running length on three discs when it arrives on October 17. It can be yours for $59.99 on Blu-Ray Disc and $49.99 on DVD.