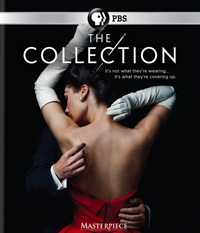 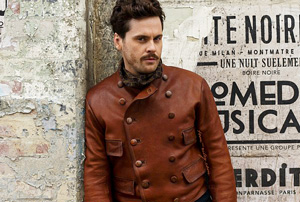 With its latest Masterpiece series, PBS Entertainment and Amazon Studios are putting forth another stylish period drama that captures viewers with atmosphere and sheer beauty. After having been available for streaming on Amazon for a short while, The Collection is now available on Blu-Ray Disc also and I was eager to take a look.

Taking place in 1947 Paris, fashion designer Paul Sabine (Richard Coyle) is desperate to get his foot on the ground again and establishing his company’s name in the world of couture. Together with his brother Claude (Tom Riley), who is the secret genius behind the clothing lines, he plans for big things. 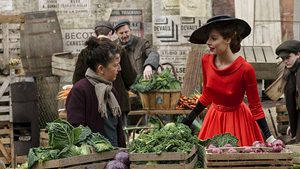 When a giant opportunity presents itself, Paul puts all his horses in the race, but it is not easy building a fashion empire when you carry with you so many secrets. The lie of him being the actual designer, his brother’s duplicitous lifestyle, and his mother’s smothering scheming are only some of the things that could easily derail their future, even without the pesky reporter Rossi who seems to have made it his mission to expose and tear down Sabine for his unsavory past during the war.

I was a bit reluctant to view The collection at first because couture fashion is not exactly something I am interested in, but something about the cover and the promise of the premise caught my attention. I am glad it did, because The Collection is a wonderful piece of television once again. 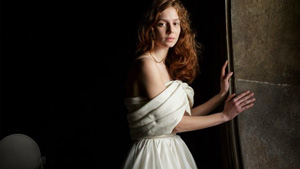 Despite its milieu, the show is actually a rather powerful character drama with a good dose of murder mystery sprinkled in and a feeling of impending tragedy evident in every episode. The characters are desperate, fatalistic, almost, trying to move forward when the past threatens to pull them under again and again.

Among it all is beauty also, however. Hope among many of the employees of the fashion house for a better future, now that the war is over and the country is recovering. Love and romance bring the sun out, even if the scars of the war are still jarring and frightening. And then, of course, there is the clothing. Beautiful pieces of art that make it all seem so surreal, ushering its wearer into a world beyond the harsh realities of their existence, by providing them with a color, elegance, and beauty that they might otherwise not possess. 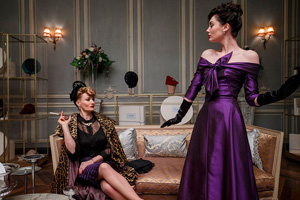 Top grades also have to go to the cast of the show. Richard Coyle is domineering, yet charming enough to pose as the head of the aspiring empire. Ruthless and calculating at one time, he is also a picture of empathy at others.

Tom Riley, fresh off his gig in Da Vinci’s Demons is once again portraying an artist who is driven, living outside the moral bounds of society, somewhere on the borderline between normal and manic.

Jenna Thiam is probably the show’s biggest discovery. Playing Nina she is portraying a young woman who is strong and vulnerable at the same time. Never one for pity, however, she has a radiance and strength that carries her character with poise through every situation and there is never any doubt in the viewers’ minds that, indeed, she is rising to the occasion from a junior seamstress to becoming a fashion model the world adores.

Supported by a host of other incredible players, featuring Frances de la Tour, Mamie Gummer, Allan Corduner and many others. 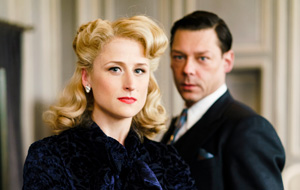 The Blu-Ray Disc boasts an equally impressive presentation. I had watched part of an episode on Amazon’s streaming video service before but gave up because the image was so unbelievable dark that it was impossible to make out any details of this production. Fortunately, that is not a problem you have to contend with on this Blu-Ray Disc, because the transfer is perfectly balanced, rendering an image that has tremendous blacks but never loses shadow detail at all. This is important particularly because the show has an almost noir feel to it with stark contrasts and deep blacks. It was actually quite staggering to see the difference between the streaming video version and this Blu-Ray jewel.

Colors are vivid and vibrant throughout and often used for maximum effects, such as the red dress standing out among the desolate streets of Paris where people are humiliated by the sheer sight of its glamor. It is a masterfully crafted production that gets top marks all around. 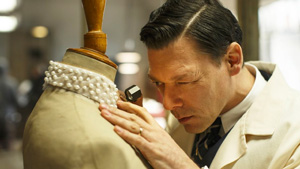 Aside from the show’s eight episodes that make up the entire first season, the release also complements them with a few bonus features. These supplements are provided as short featurettes that take a look behind the scenes and cover aspects, such as “Designing the Times,” “From Rags to Riches” and “Behind the Masks.”

The Collection is another marvelous television production that deserves your attention. It is magnificent on every level and I am already eagerly looking forward to seeing a second season, because this story still has tons of facets to explore.