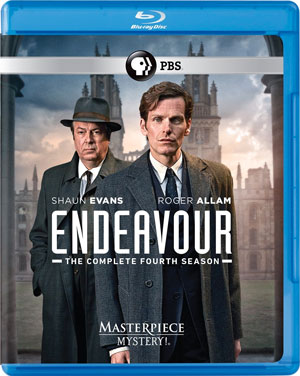 It’s the summer of 1967, and the effects of the Cold War and sixties counterculture are being felt in Oxford. It has barely been two weeks since the events depicted in the season three finale, and we find Oxford’s finest picking up the pieces of their personal and professional lives. Endeavour waits to hear the result of his Sergeant’s Exam, and self-medicates to numb his heartache over Joan, but whisky and Tännhauser will only get a man so far. Meanwhile, Thursday and Win deal with their own sense of grief. Their home is empty, Sam gone to the Army and Joan… who knows where?

In the episode “Game,” Endeavour, struggling with Joan Thursday’s sudden departure, finds himself consumed by a nightmarish hunt for a serial killer. He must race against time to find the connection between a chess-playing “thinking” machine and a baffling drowning.

In “Canticle,” when morality advocate Joy Pettybon receives a death threat, Endeavour must protect her at all costs. But the arrival of a rebellious band, The Wildwood, quickly drags Endeavour into a bloody war of social attitudes that just had its first fatality.

In “Lazaretto” whispers of a cursed ward at the local hospital and a seemingly innocuous death begin a chain of events that leads Endeavour to investigate the dark depths of the hospital, its staff and its patients. Meanwhile, he is forced to confront his own ghosts as he discovers a chilling secret.

“Harvest” begins with the extraordinary discovery of a 2,000-year-old body revealing a new lead in a missing person case. Endeavour and Thursday must investigate the eerie village of Bramford, where nature is pitted against man and pagan rites hide nuclear mysteries.