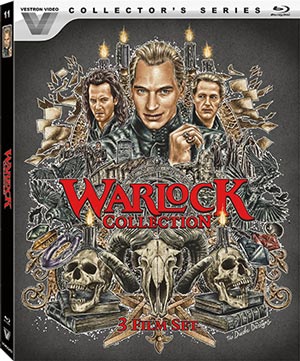 The Vestron Video Collector’s Series is looking to cast the ultimate spell with the upcoming release of the Warlock Collection, arriving for the first time on high definition this July.

A 17th-century Warlock (Julian Sands) is transported to the 20th century, where he looks to end all of creation by unleashing Satan upon the world.

The 2-disc Warlock Collection set includes all three films from the Warlock franchise, Warlock, Warlock: The Armageddon, and Warlock III: The End of Innocence.

Warlock: The Armageddon will arrive with a new Audio Commentary with Director Anthony Hickox, as well as a Vintage Making-of Featurette and Behind-the-Scenes Footage. Also included are Extended Vintage Interview Segments with Actor Julian Sands, Director Anthony Hickox, and Actress Paula Marshall.
The movie’s Theatrical Trailer and TV Spots, along with a Still Gallery will round out the film.

Warlock III will offer up some Behind-the-Scenes Footage, a handful of Vintage Interview Segments with Cast and Crew, as well as the movie’s Trailer, Video Sales Promo and a Still Gallery.

The Warlock Collection will arrive in stores on July 25 for $39.97.