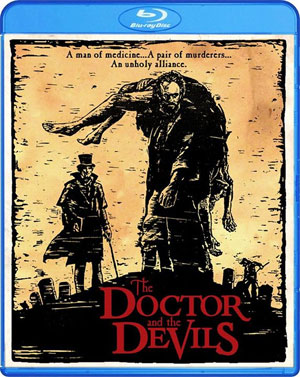 Shout! Factory has added yet another great gothic horror movie to their acclaimed Scream Factory roster, bringing The Doctor and the Devils to Blu-Ray in November.

Based on Dylan Thomas’ original screenplay, this shocking horror-thriller from 1985 stars Timothy Dalton as Thomas Rock, a brilliant young anatomy professor in 1820s Edinburgh. At first accepting only the cadavers provided him for study – those of a few hanged criminals per year – Rock eventually recruits two grave robbers (Jonathan Pryce and Stephen Rea) to secure a better supply of corpses. Coming to the gory conclusion that they will earn more the “fresher” the corpses, the two begin committing murder and delivering warm bodies to the doctor’s lecture chambers.

The release will not only contain a 1080p high definition transfer of the movie itself, but will supplement the feature presentation with a Commentary Track by Author and Film Historian Steve Haberman.

“The Doctor and the Devils” will come to stores just after Halloween, on November 4 and can be yours for $24.97. However, if you pre-order the Blu-Ray Disc now, directly from Scream Factory’s website, you will receive it on October 21, two weeks before the official street date and in time for Halloween!