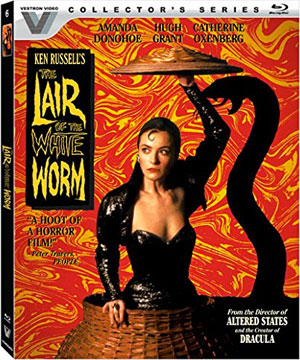 Lionsgate Home Entertainment has added the British horror classic The Lair of the White Worm to its roster, releasing the film as a Limited Edition Blu-Ray Disc that is part of the studio’s Vestron Video Collection.

James D’Ampton (Hugh Grant) returns to his country castle in England. Legend has it that James’s distant ancestor once slayed the local dragon—a monstrous white worm with a fondness for the sweet flesh of virgins. The young lord dismisses the legend as folklore, until archaeology student Angus Flint explores James’s property and unearths a massive reptilian skull and a pagan snake god’s ancient site of worship. When James’s virtuous girlfriend, Eve Trent (Catherine Oxenberg), suddenly disappears, James and Angus set out to investigate the foreboding cavern said to be the worm’s lair, where a centuries-old mystery begins to uncoil.

Based on the novel by Bram Stoker, the restored and remastered “The Lair of the White Worm” Blu-Ray version will feature a host of all-new special features, including an Audio Commentary with Director Ken Russell and a separate Commentary Track with Lisi Russell, in conversation with Film Historian Matthew Melia.

Also part of the release is the Featurette ” “Worm Food: The Effects of The Lair of the White Worm”, as well as the Interview Featurettes “Cutting For Ken” with Editor Peter Davies, and ”“Mary, Mary”, featuring Actress Sammi Davis.

Trailers From Hell featuring an introduction and commentary with Producer Dan Ireland is also part of the release.